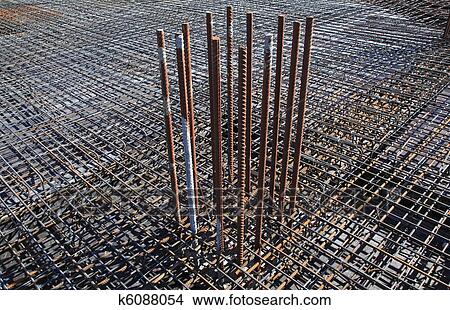 As the electrode melts, it supplies weld material which fuses the pieces of steel together. The Architect is usually employed by and represents the Owner. Tendons in the perpendicular direction are spaced uniformly. Bar numbers are rolled onto the bar for easy identification.

BEAM—A horizontal structural member supporting loads from a floor or roof system to columns, girders or walls. BEAM SCHEDULE—Table on a placing drawing giving the quantity, size and mark number of beams; the quantity, size, length and mark numbers of reinforcing bars and stirrups including stirrup spacing , and, where specified, the stirrup support bars and beam bolsters. BENT—A self-supporting reinforced concrete frame with one or more columns, usually at right angles to the length of the structure it supports.

Example: The columns and cap supporting the spans of a bridge is called a bent. BENT CAP—A reinforced concrete beam or block, extending across and encasing the heads of columns, comprising the top of a bent for the bridge span above.

BILLET—Piece of semi-finished steel, nearly square in section, formed by hot-rolling an ingot or bloom, from which reinforcing bars are rolled.

The wall heights may be variable in order to provide an arched bottom slab. BUNDLE OF BARS—A bundle consists of one size, length or mark bent of reinforcing bars tied together, with the following exceptions; 1 very small quantities may be bundled together for convenience, and 2 groups of varying bar lengths or marks bent that will be placed adjacent may be bundled together. Maximum weight of bundles is dependent on regional practices and site conditions.

CHAMFER—A beveled outside corner or edge on a beam or column, or a triangular wooden strip placed in the corner of a form to create a beveled corner. COLUMN—Vertical structural member supporting a floor beam, girder, or other member, and supporting primarily vertical loads. COUPLER—Threaded device for joining reinforcing bars for the purpose of providing transfer of either axial compression or axial tension or both from one bar to the other.

DESIGNING—Preparation of structural drawings to show general arrangement of the structure, size and reinforcement of members, and other information for construction and for the preparation of placing drawings.

Colloquially, any wheeled cart or carrier. A bar extending from one concrete section into another is said to be doweled into the adjoining section. Examples: column dowels into a column or horizontal wall bars doweled into an adjacent wall section.

ENDO—The dimension from the end of a reinforcing bar to a point of reference along its longitudinal axis; i. ENGINEER—A licensed professional or structural engineer, responsible for the design of reinforced concrete, structural steel, and other materials which make up the complete structure.

The sections are usually divided by a strip of metal or bituminous material and are sometimes tied together with dowels, using sleeves or coatings at one end. Also refers to a triangular-shaped weld. Also refers to encasement of reinforcing steel for fire protection.

FORMS—A temporary structures or molds, usually made of wood, fiberglass, metal or plastic, for the support of concrete while it is setting and gaining sufficient strength to be self-supporting.

HEADER—A short reinforced beam, joist or slab edge generally used at floor openings to support other similar members terminating at the opening. HICKEY—Hand tool with side opening jaw used in developing leverage for making bends on reinforcing bars at the jobsite.

Reinforced concrete members may be made integral by bond, dowels, or being cast in one piece. Colloquial terms frequently used include rod-setter, rodbuster; bar-setter, and bar placer. In some cases, these jack rods are also used as a portion of the vertical reinforcement required.

L LAP SPLICE—The overlapping of two reinforcing bars by lap splicing them side by side in contact or non-contact ; similarly the side and end overlap of sheets or rolls of welded wire reinforcement.

Also, the length of overlap of two bars. LIFT—Units of reinforcing bars tied together for shop or field convenience. Lifts are classified in two categories: 1 Shop lifts and 2 Field lifts.

Shop lifts are units of reinforcing bars loaded for shipment to the jobsite.

Straight and bent bars are not combined in the same lift. Maximum weight of a lift is dependent on regional practices and site conditions. The term LIFT also describes the concrete placed between two consecutive horizontal construction joints, particularly when formwork is reused and lifted. Each slab is lifted into final position by jacks on top of the columns.

Floors are secured at each floor level by column brackets or collars. M MARK OUT—Indicating with keel crayon marks on the forms, the location of each reinforcing bar; usually done by the Foreman from information derived from the placing drawings, prior to starting actual placing operations in an area. 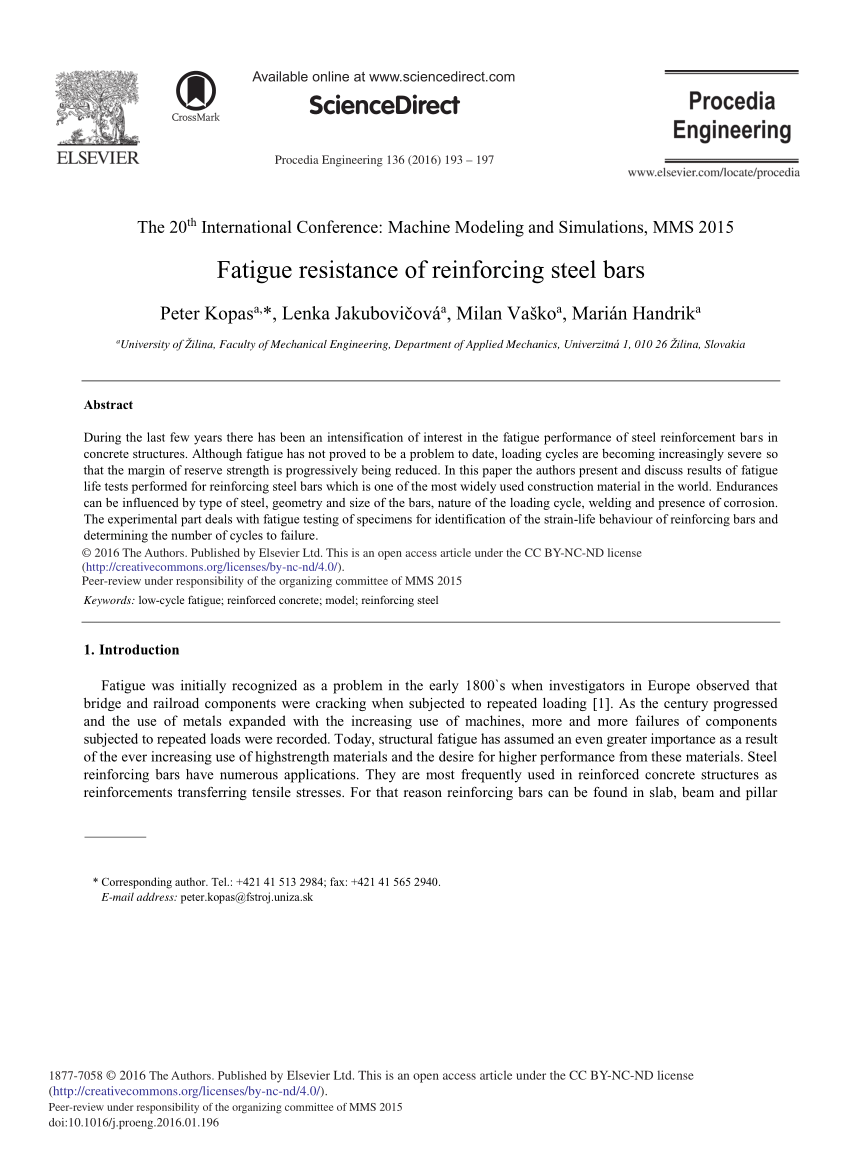 MARKS—A series of letters, numbers or a combination of both used to designate a the parts of a structure or b the identity of a bent reinforcing bar. MAT—A large footing or foundation slab used to support an entire structure. The term MAT also describes a grid of reinforcing bars. MPa—Abbreviation of the metric unit megapascals, used in measuring load or stress. Approximately 6. O OFFSET BEND—Any bend in a reinforcing bar that displaces the center line of a section of the bar to a position parallel to the original bar, in which the displacement is relatively small; commonly applied to column vertical bars.

OWNER—The corporation, association, partnership, individual, or public body or authority which the Contractor enters into agreement with and for whom the Work is provided. P PAD—A footing; sometimes a block of concrete to support machinery. PANS—Metal forms for one-way reinforced concrete joists one-way pans and for two-way waffle slab concrete joists dome pans. PIER—A short column used as a foundation member in construction.

Examples include Placing Drawings and Structural Drawings. R RACKS—Metal or wooden supports for that portion of a reinforcing bar that extends beyond a construction joint and is not already supported by existing formwork or conventional tying to adjacent bars. RUNWAY—Decking over an area of concrete placement, usually of movable panels and supports, on which buggies of concrete travel to points of placement.

Screeding is the operation of rough leveling. The edge of the slab is usually thicker and acts as the footing for the walls.

SLING—Short lengths of wire, nylon, or Kevlar rope, with a spliced eye at each end or a spliced eye at one end and a hook at the other, used to encircle a bundle of bars for hoisting purposes. Vertical slip forms are used in buildings and tanks and horizontal slip forms are used in paving. SPALLING—The development of concrete spalls or fragments, usually in the shape of flakes, detached from a larger mass of concrete by a blow, action of weather, pressure or by expansion within the larger mass.

SPAN—The horizontal distance between supports of a structural member such as a beam, girder, slab or joist; distance between piers or abutments of a bridge. SPLICE—Connection of one reinforcing bar to another by lap splices in contact or non-contact , mechanical splices, or welded splices; the lap between sheets or rolls of welded wire reinforcement.

SPREADER BAR—A steel beam suspended from a crane, having two or more hooks or shackles to which slings are attached to eliminate the possibility of bending reinforcing bars in a bundle due to handling.

Sometimes a simple mat footing is called a spread footing. It is used as a high chair resting on a lower mat of reinforcing bars and supporting an upper mat.

When a cantilever retaining wall and its footing are considered as an integral unit, the wall is often referred to as the stem of the unit. STIRRUPS—Reinforcing bars or welded wire reinforcement used in beams and girders for shear reinforcement; typically bent into a U-shape or box-shape and placed perpendicular to the longitudinal reinforcing bars.

The column strip is a quarter-panel wide each side of the column centerline and runs either way of the structure, from column to column. The middle strip is half a panel in width, filling in between column strips, and runs parallel to the column strips to fill in the center part of a panel.

For reinforced concrete structures, they include the sizes and general arrangement of all reinforcement from which the Fabricator prepares placing drawings. Portion of a bridge above piers and abutments. TENDON—A steel element such as strand, wire, bar, or rod, or a bundle of such elements, used to impart prestress to a reinforced concrete member.

TIE—Reinforcing bars bent to a circular, or to a box-shape and used to hold vertical longitudinal reinforcing bars together in columns and beams. TIE BARS—Reinforcing bars at right angles and tied to main reinforcement to keep it in place; bars extending across a construction joint. TILT-UP—A method of concrete construction in which the walls are cast horizontally at a location adjacent to their eventual position, and lifted into place after removal of forms.

Named after the waffle-like appearance of the underside of the finished floor. WALL—A vertical structural member which encloses, divides, supports or protects a building or room. Bars may be lapped, butted, or joined with splice plates or angles. Also known as welded wire fabric. WINCH—Mechanical lifting device attached to derricks on which cable is wound up by means of a crank and locked in position by a ratchet.

Work is the result of performing services, furnishing labor, and supplying and incorporating materials and equipment into the construction, all as required by the Contract Documents. Buildings Floor Systems. Bridges Bridge Types.