MY HERO Project seeks unique works of art by professional and student artists that celebrate the lives and courageous acts of heroes who work to promote change by positively affecting others and their communities. Completed artwork should reflect thoughtful ideas to show how the selected hero demonstrates heroic action and creates positive social change.

Accepting Ongoing Submissions! You do not have to walk on your knees For a hundred miles through From the spoken words of influential leaders, to emotionally powerful lyrics in a song, heroic audio is all around us.

One third of all kids today will never go to school. Millions cannot read or write. Tens of millions go without basic drinking water, a proper diet, or health care. Many of these children still work for low pay in horrible conditions. When I first learned of him three years ago, I was extremely impressed by how articulate and committed he is to the cause of child rights and equality around the world, and his obligation to making the world a better place for disadvantaged kids — whether through traveling to the developing world to meet disadvantaged children to understand their plight or working to raise funds for them back in Canada in ever-more creative ways.

Bilaal became involved when he was only four years old. A devastating earthquake ravaged the province of Gujarat in India in January His parents were reading a newspaper story about the event and told him about a priest from his religious community who, tragically enough, died in the rubble.

Bilaal immediately thought of how different — and how much more difficult - his life would be without parents. Bilaal happened to be eating a clementine orange at that time, and suggested he could help out by selling them door-to-door in his suburban Toronto neighbourhood to raise funds for those in Gujurat. 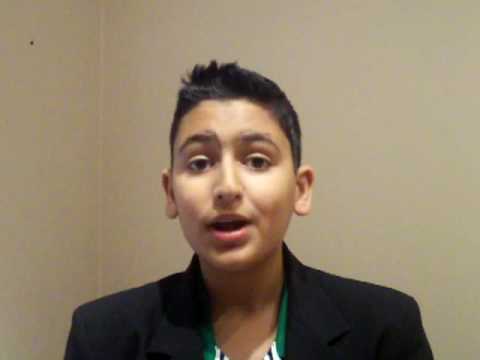 With at least one parent alongside him at all times, he set out on his mission in the frozen Canadian winter. It was a small start, but Bilaal was onto something.

In addition, Bilaal reached out to more than fifty major corporations by phone and letter. Heinz Canada donated over 2, cases of baby food and Loblaws supermarket and Shoppers Drug Mart responded to his appeal with gift certificates.

Bilaal later founded an organization www. He met with hundreds of children, program organizers and dignitaries, including the President of the Maldives.

Bilaal wanted to share these experiences with other people. Last year he wrote and published a book called Making Change: Tips from an Underage Overachiever www. He wanted them to learn how possible — and how much fun — it really is to make a difference in the world.

Bilaal held the launch of his new book at his school, St. I had the pleasure of watching him speak in front of more than students, teachers and other invited guests. Bilaal specifically enjoys speaking to young people at schools throughout Canada, promoting the Trick or Treat for UNICEF program that raises funds to build schools for children in Africa.

Bilaal has also traveled to countries throughout the world to spread the message. In addition, Bilaal went to Mexico to help install solar powered LED lights in the village of El Coyote, which was inspired by an award-winning science fair project he completed for school. The lights allowed young students in El Coyote to stay up later to read and complete their homework. They were also no longer forced to use the old kerosene lights, which can cause health problems and are potential fire hazards.

The MY HERO Project (myhero.com)

Bilaal has recently established an endowment fund at his middle school from the advance of his book. Each year, a student who completes the greatest number of hours of community volunteer service receives a special award provided by the endowment fund and is recognized by his or her teachers and principal at graduation.

Based on this success, he will soon be starting a similar Youth Volunteer Program across Canada. His ambitious goal is to establish a youth volunteer award program in each and every middle school across the country within two years. Bilaal is also starring in his own online radio show that will begin shortly. It will provide a platform for youth who are active in making a difference in their communities and around the world.

Thousands of young people from more than 25 countries around the world kicked off their shoes to better understand the struggles faced by poor children in underdeveloped countries, many of whom cannot afford shoes, let alone other basic necessities.

Throughout the week, Bilaal participated in more than 50 radio, TV, newspaper and magazine interviews, helping to raise awareness about child poverty in the Global South. It is a website www. Bilaal and his partner are planning for Sudokuhub.

Most recently, Bilaal met personally with Nelson Mandela and Archbishop Desmond Tutu in South Africa, where they discussed upcoming initiatives and ways in which young people can become more empowered to take action on important global issues.

Bilaal also spoke to school children and various charitable organizations. Others, such as Sudokubub.

Bilaal is a young Canadian who will make a difference and influence others to get involved well into the future, not only here, but throughout the world. Essays on Heroism. Watch our short introduction video for more information.

Desmond Doss Desmond T. Doss, a military medic, practiced non-violence while saving many lives during WWII. Our gallery features art in the theme of heroism.

All artworks in our commercial free, age-appropriate Gallery are contributed by professional and student artists as well as curated from art institutions around the world. View the winning films in the 15th Annual International Film Festival!